Everyone is inspired to action differently: some by words, some by images, some by film, some by the example of others. The following article highlighting climate change via images from NASA over the last half century are startling to say the least. I hope they bring some to understand that the time to act is now and every effort towards reducing one’s carbon footprint is useful and extremely necessary.

From NASA comes this sobering collection of photos and satellite images about the incredible changes the planet has gone through in less than a century.

It’s easy enough to ignore–or even deny–climate change when its effects don’t impact your daily life. That superstorm? Must have been a fluke. The big drought? Things like that just happen every so often. So if statistics and admonishments from scientists don’t do it for you, maybe these startling before and after photos from NASA will. 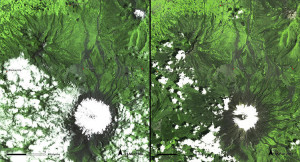 Atop the Cotopaxi Volcano in Ecuador–at 5,897 meters (19,347 feet), one of the tallest active volcanoes on Earth–sits the Cotopaxi Glacier. Here is the melt between March 1986 and February 2007. 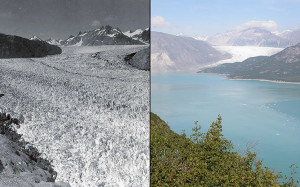 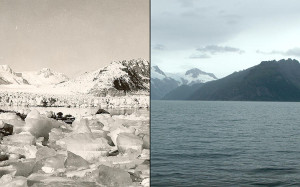 Northwestern Glacier in Alaska, 1940 compared to 2005. With few exceptions, glaciers around the world have retreated at unprecedented rates over the last century. 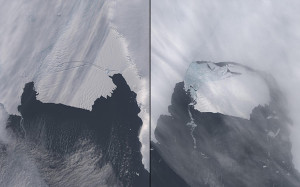 Pine Island Glacier in Antarctica. October 2013 compared to November 2013. An iceberg estimated to be 35 by 20 kilometers separated between November 9 and 11. Designated “B-31,” it is about 50% larger than its predecessors in this area.

Artificial land in Singapore, in 1973 compared to 2009. Between 1973 and 2009, Singapore created new land for airports, shipping and oil refineries. Also visible are new cities, causeways, reservoirs, and golf courses.

The Black Forest Fire near Colorado Springs, Colorado, was the most destructive wildfire in the state’s history. These photos show April 2013 compared to June 2013.

If this doesn’t convince you that there’s a problem, maybe nothing will.

The intersection of art and science is a varied and multifaceted place. Much is indeed left to interpretation. However, without those whose creativity breaches the divide, there would be a terrific void in our experience and education of the subject of the environment be it climate change or appreciation of the world beyond ourselves. Below […]

Storm King Show to Focus on Climate Change in 2018